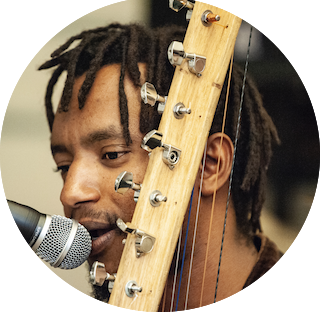 Not only is Adama Dicko, who was born in Burkina Faso and is currently living in Vienna, a singer and N'Goni player but also he builds his own instruments. The N'Goni, or more precisely camels N'Goni, is a string instrument from West Africa (Burkina Faso and Mali), which is mainly played by the Griots, the singers and storytellers of West Africa. After practicing many N’Goni playing techniques, Adama created his own style between blues and reggae which allows him to sing and talk about his journeys and experiences. Political and social issues are always topic in his lyrics.

He is creating full sounds that range from impulsive to energetic to a meditative simplicity. For Adama music is a direct way to name things in a harmonious way. He appreciates the variety and also the traditional significance of his music.

Dive into distant worlds of sound. In 2015, Adama set out to record his own album, featuring international musicians who accompanied him on his journey. In early 2016, Adama recorded his debut album “jam jam” featuring many great musicians from across the world. Adama considers this album a book, filled with stories, impressions and images; a book that offers itself to everyone with open ears and hearts. Dive into distant worlds of sounds and into Adama's story.

No items found.
We want to help artists make a positive impact in society, and know that economics can be a regressive tool! With us you do not have to worry about raising funds, developing your project, getting the right attention etc. Send us an email and we will consult you!
Get in touch
Copyright © 2020 hemispheres. All rights reserved.